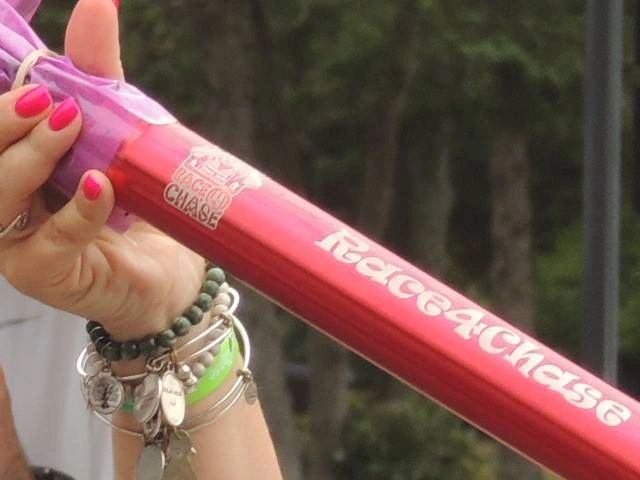 The Batons 4 Chase Program looks to keep Chase’s spirit and vitality alive by requesting athletes to take up the baton, compete in a challenging athletic event in Chase’s honor and pass the baton to another willing to do the same.

The baton program was inspired by close friend of the Kowalski family and original Race4Chaser, Kevin Bresnahan.  As part of his campaign to complete his first 1000 miles in Chase’s honor, Kevin ran his last 14 miles from Bethel High School where Chase had competed in his first track races at age 2.  It was there that he left his first Race4Chase baton at the starting line along with a message for someone to find asking for him to take up the baton and do some athletic event in Chase’s honor and pass the baton along to someone willing to do the same.

Kevin proceeded to run 10 miles to the Lakewood Trumbull YMCA camp where Chase learned to play baseball and will host one of the three Race4Chase Kid’s Triathlon Programs in 2014.  He left his second baton at this location with the same message before meeting up with 100 Race4Chasers at Chalk Hill Elementary School in Monroe Ct where Sandy Hook Elementary School students currently attend school.  There, he presented a third baton to the Kowalski family to be placed on their fireplace mantel as a reminder of the inspiration that Chase has given to Kevin and many others.

Baton #1 was taken by Alexis Garrity, age 10, who was visiting in Monroe and attending the Chalk Hill celebration.  After hearing of the baton, she insured that her mother took her directly to Bethel High School to secure it for her and subsequently ran her first 5k at the Disney Happy Haunted 5k Trail Run in Orlando Florida.  The baton has traveled from Orlando to St Augustine, FL to Columbus, SC.